Hello everyone, AndroidMir is with you and today we have a receiver of the Magic series from BQ – BQ Magic L on our review. I think, choosing a letter for this model, a reference was made to the size Large – large. After all, this is the largest screen in the BQ Magic line of smartphones. But besides the size, the smartphone also has everything you need, including good specifications, a camera, a large battery, and NFC.

Outwardly, the box has remained almost the same as that of other smartphones from the Magic line, but its size has increased, it can hardly fit in the hand. Inside the box, we are waiting for a standard kit: 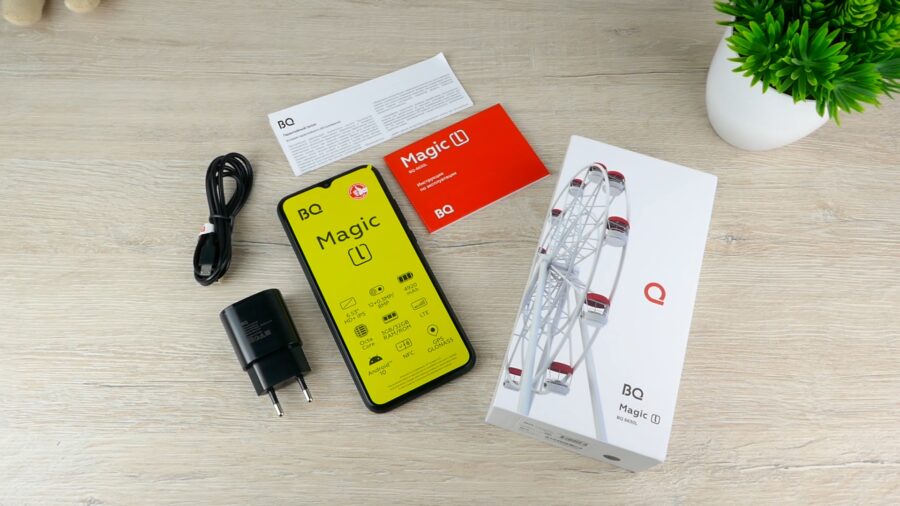 There is no clip for the SIM card tray, because the SIM card can be installed under the cover of the smartphone, which, by the way, is very eye-catching. The rough surface is most reminiscent of natural stone and looks very cool, and besides, it also sits perfectly in the hand. You can also choose BQ Magic L in two other colors, but black looks cool. The large block of cameras also looks very very modern and stylish, although the cameras themselves occupy only part of its area. 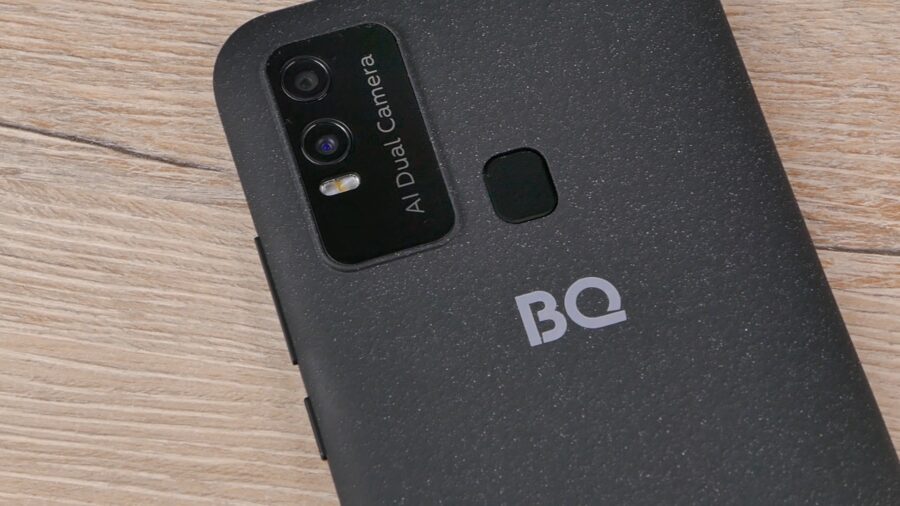 Also on the rear panel there is a fingerprint scanner and the main speaker with a small dot that will prevent it from being completely covered by placing it on a hard surface. 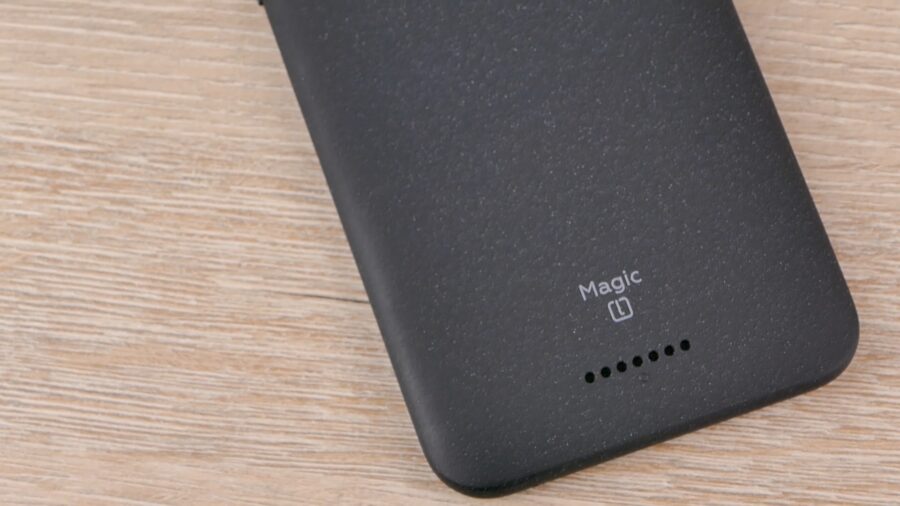 Under the cover you can find a non-removable battery and 2 slots for Nano Sim + a slot for a MicroSD card up to 256 GB. And in general, the assembly of the phone is performed at the highest level, it is immediately clear that the phone is already made much better than the most budget models, not even talking about its capabilities. 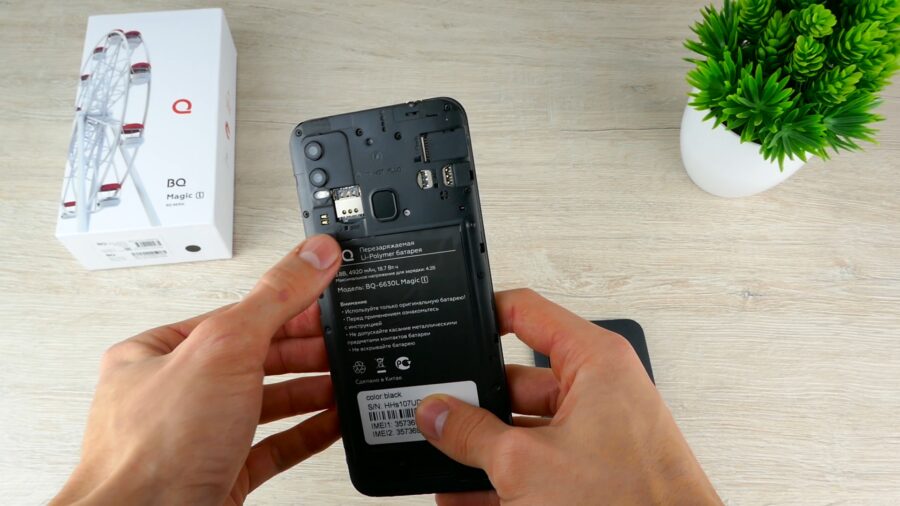 The second important feature of the BQ Magic L is its large and cool display – 6.53” with HD+ resolution and a very good quality IPS matrix. The screen is bright, colorful and with good viewing angles, which is already the norm by the end of 2020. 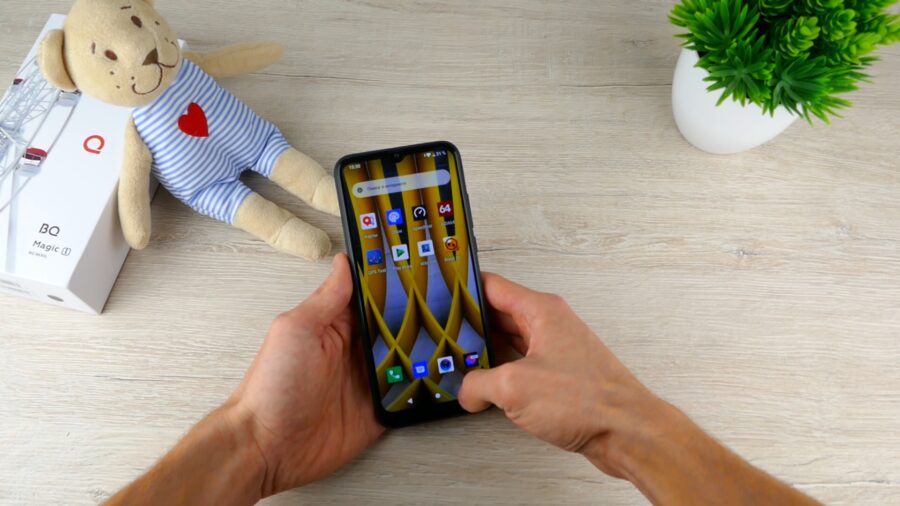 Of course, there are not the smallest frames around the screen, but I would like to make the chin smaller.

If we talk about the quality of the speaker, then it is quite good, but it’s better for you to listen to it in the video review. Although my microphone will not accurately transmit the music, but at least you will understand approximately. 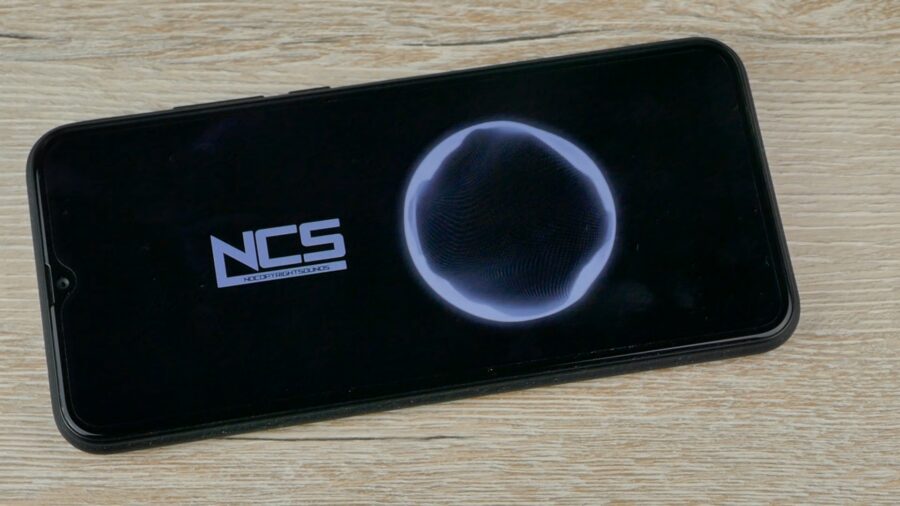 The BQ Magic L is equipped with the already known 1.6 GHz Unisoc SC9863A octa-core processor, 3 GB of RAM and 32 GB of internal storage. This performance is already more than enough for everyday tasks and even for many programs and toys. 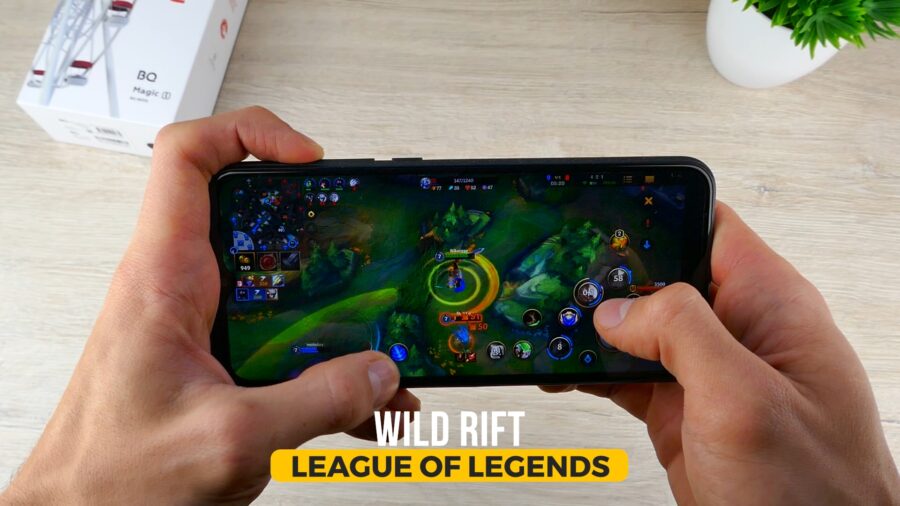 After testing it in some popular games, I can say that on BQ Magic L you can comfortably play even fairly demanding games on minimal graphics.

BQ smartphones are always happy with a complete set of wireless networks and interfaces:

Checked, everything works quickly and accurately.

As usual, the software interface resembles almost pure Android 10, which is very good for its responsiveness and smoothness. There are many apps installed right out of the box that can be useful, but if not, they can always be removed with a couple of clicks. There is enough RAM to hold several applications without restarting. 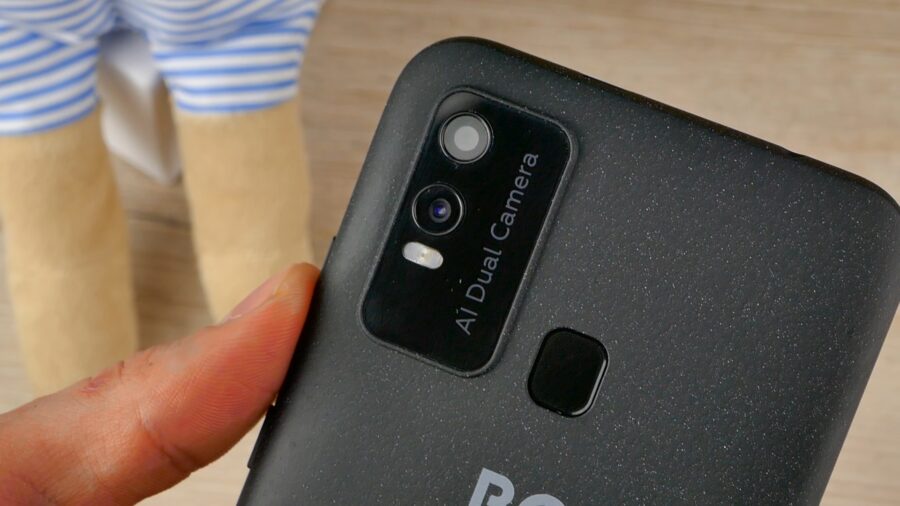 The main camera is a 12 MP matrix and a 0.3 MP depth sensor, the photos are quite high quality, autofocus works quickly and the camera application interface itself turned out to be very pleasant. Here are some examples of photos from the main camera. 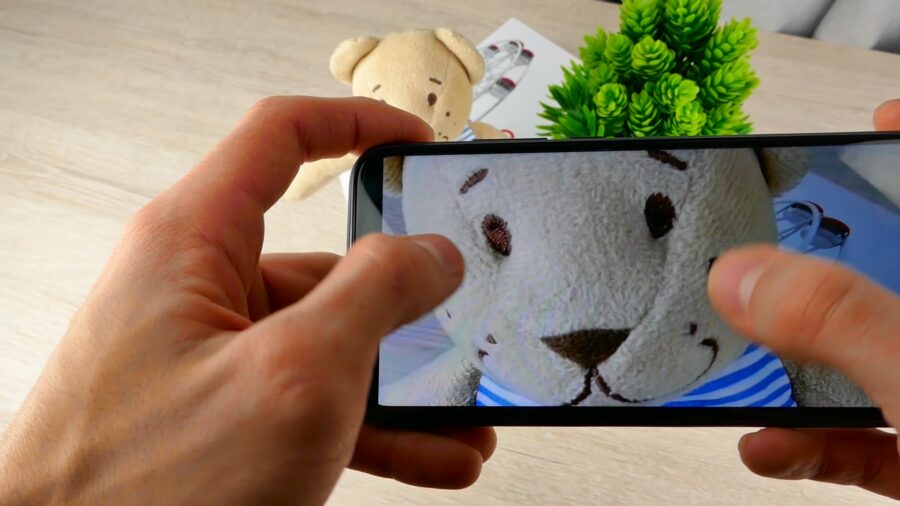 The front camera has received a resolution of 8 MP and can take this kind of photo. More than enough for video communication. 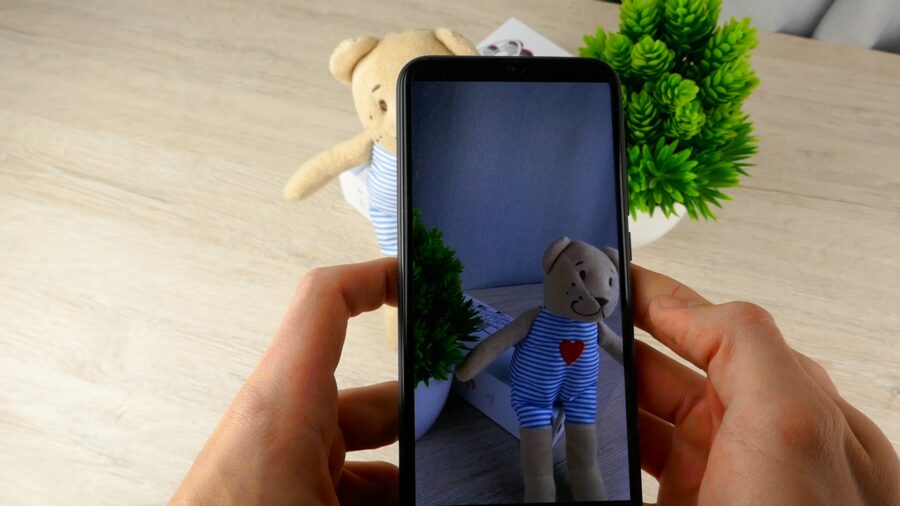 After watching (reading) up to this point, you might think that “Is it really so smooth?” and I will answer you that “Yes, very smoothly” because there is even a large battery with a capacity of 4920 mAh and I am inclined to believe such a figure, because there is an impressive battery under the cover. This capacity is enough for a phone with a margin for a day, and with more economical use, and much longer. 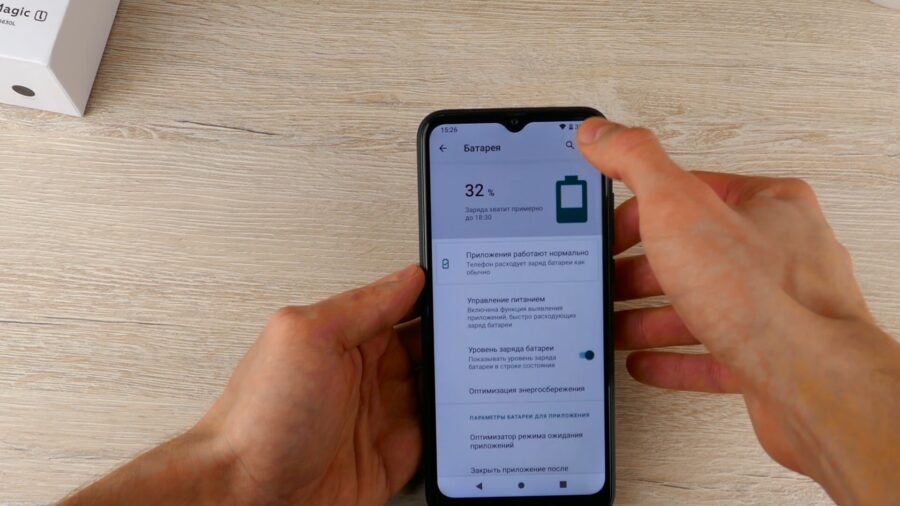 It really turned out to be very difficult to highlight the real flaws in the BQ Magic L smartphone, because on almost all fronts it has either “Good” or “Normal” and all this at a low price of 8990 rubles.

The main advantages of the BQ 6630L include:

And to the shortcomings conditionally:

But these are rather minor quibbles that not many people will even notice in real use, and the price does not oblige at all.

And for me, the cool back cover remained the most pleasant, both in design and in sensations.